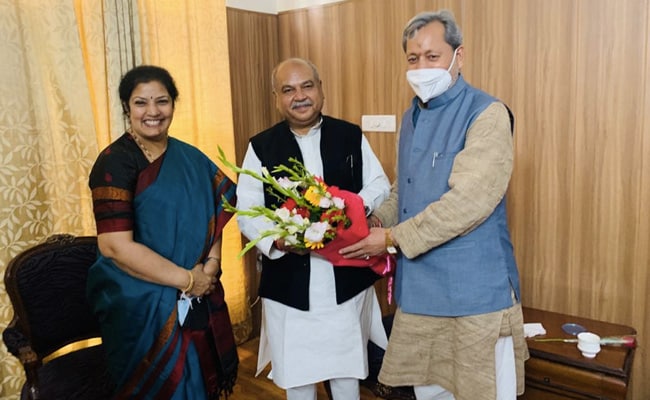 The BJP’s 57 Uttarakhand legislators are scheduled to choose a new leader today who is likely to become the state’s eleventh Chief Minister. The development follows Tirath Singh Rawat’s resignation from the post yesterday, four months after taking charge, amid infighting in the party’s state unit.

Uttarakhand is due for its next Assembly election in less than a year.

“In the legislature meet at 3 pm, we will elect the leader. Post that, we will meet the Governor for government formation. It’s possible that the Chief Minister will be from among the MLAs,” said BJP Uttarakhand chief Madan Kaushik.

The meeting will be attended by the party’s central observer Narendra Singh Tomar, who arrived in capital Dehradun around noon, and its state in-charge Dushyant Kumar Gautam. Mr Tomar held several meetings, including with Tirath Singh Rawat and other state BJP leaders.

The names of nearly half-a-dozen MLAs have already begun doing the rounds as probables for the top job, including that of Satpal Maharaj, Dhan Singh Rawat, and Pushkar Singh Dhami, according to a PTI report. A section of party leaders has also suggested the name of former Chief Minister Trivendra Singh Rawat, it said.

“A constitutional crisis has emerged in Uttarakhand because there is less than a year for the next election. Will the Election Commission give permission to hold a bye-poll? While it has the mandate to hold an election, there have been instances where it denied permission,” former Chief Minister Trivendra Singh Rawat told NDTV.

“The Election Commission has given in writing that it cannot hold elections amid the Covid pandemic in certain states,” he said.

Tirath Singh Rawat, till then an MP, was sworn in in March following fierce dissent against the then Chief Minister Trivendra Singh Rawat. To keep the post, however, Mr Rawat would need to win an assembly seat and become a member of the Uttarakhand assembly by September 10.

Holding a bye-poll would be tough for the poll panel given the massive controversy over the March-April election in five states held alongside rising infection rates in the second surge.

“There are many bye-elections due. The Covid situation is a major consideration,” Election Commission sources had said yesterday.

Tirath Singh Rawat, who had been in Delhi for the past three days holding meetings with the BJP’s top leadership, was asked yesterday afternoon to quit. Soon after, he sought an appointment with Governor Baby Rani Maurya, but before that he handed his resignation to party chief JP Nadda.

“Given the constitutional crisis, I felt it was right for me to resign. Bye-polls could not be held because of COVID-19,” he said yesterday in a brief statement.

His 114-day stint was packed with controversies. The BJP’s Uttarakhand leaders had complained to the Delhi leadership about public anger at some of his pronouncements. Mr Rawat even embarrassed his party by criticising his predecessor’s policy decisions.

His handling of the Kumbh Mela at the peak of the Covid spike and the comment that “no RT-PCR test was required” provoked a huge backlash.