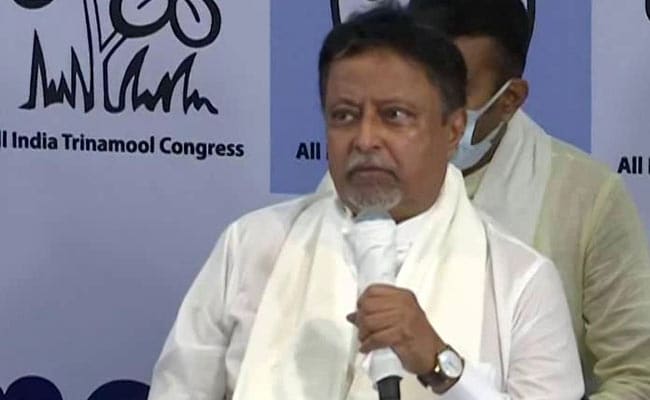 Mukul Roy was once the closest aide of Mamata Banerjee. (File)

“Ghorer chhele ghore phirlo (Mukul has returned home),” said Chief Minister Mamata Banerjee. He was never a traitor like the others, she stressed.

“Yes, more will come,” she confirmed when reporters asked. “As you know, old is always gold.”

Mukul Roy told reporters: “I feel great at seeing my old colleagues, after leaving the BJP. I can’t be in the BJP.” He went on to describe the Chief Minister as “the only leader of Bengal and India”.

To the uncomfortable question of his repeated attacks on “Didi” in the past few years, Mr Roy replied: “I never had any differences with Mamata Banerjee.” Coming to his rescue, Ms Banerjee told reporters: “Don’t try to create differences.”

On the question of Suvendu Adhikari, the Chief Minister snapped: “Only those who are sober and those who don’t encourage bitterness are welcome back.”

Sources say Mr Roy was the first target of Ms Banerjee’s Operation “Return of the Prodigal”, as it were.

Ms Banerjee had signalled it during the election campaigning, when she said at a public rally: “Mukul Roy is not a bad as Suvendu Adhikari”.

A founder member of the Trinamool, Mr Roy was its General Secretary when he quit; the post has now gone to the Chief Minister’s nephew Abhishek Banerjee, who first reached out to Mr Roy and his family.

Abhishek Banerjee last week visited Mr Roy at the hospital where his wife is admitted. The very next day, Prime Minister Narendra Modi reportedly spoke to Mr Roy on the phone to ask after his wife’s health, reflecting the BJP’s nervousness.

The homecoming of its leaders, including those who switched just before the April-May Bengal election, is part of the Trinamool’s forward planning for 2024. Its goal is to prevent a repeat of 2019, when the BJP scored big gains at the Trinamool’s cost.

For the BJP, he had been a big acquisition that had fanned its hopes for a political coup in Bengal. Mr Roy and his supporters did deliver in 2019, but the dream soured by the time it came to the state election.

Sources say Mukul Roy had told close associates about feeling “suffocated” in the party. His frustration was amplified by the BJP’s defeat in the Bengal election. The former Trinamool MP concluded that the BJP’s political culture and ethos is alien to Bengal and it is doomed to remain an “outsider” in the foreseeable future.

“No one has their finger on their pulse of the people like Mamata Banerjee,” sources close to Mukul Roy said quoting the leader as saying. “Certainly not the BJP or those who have jumped from Trinamool,” he reportedly said.

His resentment is believed to be directed at Suvendu Adhikari, another Mamata Banerjee aide who quickly became the BJP’s most favoured after he joined the party in December. The BJP has invested heavily in Mr Adhikari, whose victory over Mamata Banerjee in Nandigram turned out to be the only solace for the party in an otherwise disappointing outing.

Sources say many former Trinamool leaders who followed Mr Adhikari before the Bengal election want to come back.

After a long time, the Trinamool has these defectors exactly where it wants them. Sources say the party is eager to “strike while the iron is hot” and break off a chunk of the BJP, preferably a bigger one than the section that left the Trinamool before the election.