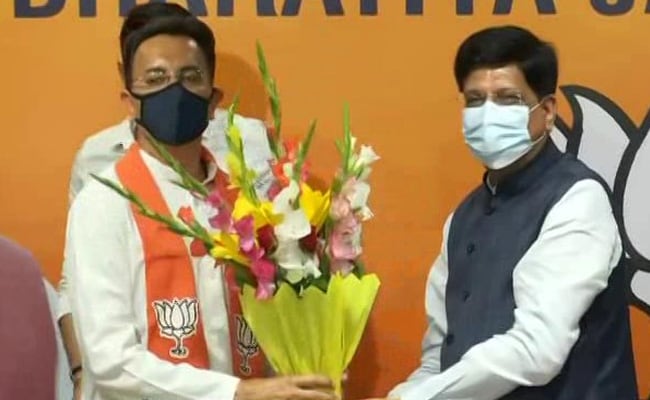 Jitin Prasada had denied rumours in 2019 that he was leaving the Congress.

Former Union Minister Jitin Prasada, once close to Rahul Gandhi, crossed over to the BJP today in a huge blow to the Congress ahead of the Uttar Pradesh election next year.

The 47-year-old leader, who was the Congress’s top Brahmin face in UP, exits at a time the opposition party is in meetings in Delhi to try and untangle a feud in Punjab, another state voting in 2022.

“BJP is the only real political party. It’s the only national party. The rest are regional. BJP and (Prime Minister Narendra) Modi only ones that can meet the challenges the country is facing now,” he said, claiming he started thinking about the move 10 years ago (when he was a Union Minister).

Mr Prasada is the second high-profile Rahul Gandhi aide to move to the BJP after Jyotiraditya Scindia left last year. Soon after his exit, there was speculation that another prominent “rebel”, Rajasthan leader Sachin Pilot, may also be on his way out.

“It’s sad that Jitin Prasada has left, he has held important posts,” said Congress spokesperson Supriya Srinate, questioning his decision to join a party “responsible for loss of lives during Covid”.

In 2019, Mr Prasada emphatically denied joining the BJP. Sources say at the time Priyanka Gandhi Vadra, in charge of rebuilding the Congress in UP, had convinced him to stay.

“What’s the point in being a party if you can’t help the people you represent,” Mr Prasada asked.

Just five months ago, he had attacked the BJP government in UP for reportedly manhandling his friend and fellow Doon School alum Rahul Gandhi during a march over the Hathras rape case.

The autocracy and desperation of the BJP govt in UP was on full display today. By manhandling @RahulGandhi and preventing @priyankagandhi from reaching out to Hathras victims family they have revealed their inherent disregard for every Indian’s democratic right and basic freedom. pic.twitter.com/Y014wCQb6W

His frustration with his party of 20 years was no secret; he was part of the “G-23” or group of 23 Congress leaders who had written to party chief Sonia Gandhi last year calling for sweeping reforms, collective decision-making and “full-time, visible leadership”.

After that cataclysmic letter, Mr Prasada was among the few “dissenters” to be given any role at all; he was tasked with the Congress’s Bengal election campaign, which turned out to be a disaster.

The former Lok Sabha MP from Dhaurahra in Uttar Pradesh was one of the Congress’s top leaders in India’s most politically vital state.

For the BJP, Jitin Prasada is an important value addition as its government in UP, led by Yogi Adityanath, battles criticism over the handling of Covid.

Mr Prasada’s entry is meant to help the BJP reset the optics of the Yogi Adityanath government, perceived by a section of UP’s Brahmins as being pro-Thakur (the Chief Minister’s caste).

Brahmins make up about 13 per cent of UP’s voters and are an influential chunk that has steadily gravitated from the Congress towards the BJP over the years.

In July last year, Mr Prasada launched a “Brahmin Chetna Parishad” but it had little impact.

But some in the Congress question his relevance. He lost three elections on the trot – the 2014 and 2019 national elections and the UP assembly polls in 2017.

Lately, some in the UP Congress had also turned against him. After the letter bomb, a Congress unit in the state called for action against the G-23, with special mention of Mr Prasada and his family’s strained history with the Gandhis.

His father and Congress veteran Jitendra Prasada had challenged Sonia Gandhi’s leadership of the party in 1999 and had contested against her for the post of party president. He died in 2002.

Jitin Prasada went on to become a minister twice in the Manmohan Singh-led Congress government and was considered one of Rahul Gandhi’s confidants at one point.